skip to main | skip to sidebar


When I tell people I'm black - the fact that I sometimes have to tell them indicates something about both how I look and how many whites don't realize that "black" was legally enforced at the state level as the racial classification for anyone with a known drop of Negro blood - they sometimes look at me quizzically and ask, "so, you really consider yourself black?" Nah, because I go to the opera and ballet I no longer consider myself black. Nah, because my hair is straight and I'm so fair my skin burns within 30 minutes of sun exposure, I don't consider myself black. The funniest remark was from a friend whom I told I was filling out a questionnaire about 'passing,' "What, are you answering questions about how you try to pass for black?" ARE YOU OUT OF YOUR MIND???? Why would I, or anyone, choose to be black?

[Note: the subject of white fascination with blackness is, well, another subject that I will cover at some point. Then, I will discuss black popular entertainment and how it's often a version of minstrelsy - for instance, over 70% of hip-hop records are sold to young white males. Let this statement of bell hooks' suffice for now: "It is a sign of white privilege to be able to 'see' blackness and black culture from a standpoint where only the rich culture of opposition black people have created in resistance marks and defines us."]

Anyone on the other side of the color line knows that they'd have a better life as a white person in this country. I doubt my family would have ever chosen to be black, but through pre-Civil War white man + black woman, that's how it ended up. MaMa's materal grandmother was brought over as a slave from Africa, and ended up having a child by a white man. On both sides of my family, when we reach back into the past, that's the story we find again and again: our named white male ancestor, owning x number of acres and y number of slaves, had a child with a slave woman known only as slave. (Except for a somewhat famous case in history that one can read about here. Joseph Gregorie Guillory is my great-times-six grandfather; his slave mistress Marguerite is my great-times-six grandmother.) 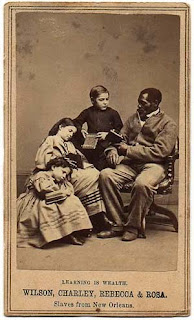 [Note: The slave trade was not only an exchange for manual labor but also for sexual goods. In fact, in places it was de rigueur for a young white man to have a black woman as mistress (consensual or not) before marriage to a white woman. An attractive, lighter-skinned, young female slave could auction off for as much if not more money than a young male laborer. There are even records of plantation owners selling their own daughters, conceived with a female slave, to other plantation owners as sex slaves. But that’s another post.

Pictures of mixed race children were spread by abolitionists in the North, especially in the late 1850s, to alarm the largely white supremacist population: ‘Soon, the n-----s will look like us! We won't be able to tell them and us apart!’ Abolitionists also published pamphlets arguing that the good Christian white men of the South needed to be ‘saved’ from the witchery that these soul-less black women must be using to seduce them. The extent to which abolitionism was motivated by white supremacy and segregationist goals is also a topic for another discussion.]

It did not matter how white the progeny of these unions (consensual or not) looked. As in the picture above, all of black slaves, Negro blood made you a Negro. And it made you inferior. It meant that you had to be segregated, had to get the hand-me-downs of whites in schools, weren't allowed to go certain places. When my father went to college when he was 18, he interacted with whites for the first time. He went there sure of his own inferiority, expecting to not perform as well as they did. To his surprise, as he will modestly admit, he was better than 90% of white people. What he had been taught his whole life, what had been encoded into the American black experience by whites, was wrong.


[Note: Only get me started on the Civil War if you want to be made to go sit in the corner. It was fought over slavery. Stop. The rest is historical revisionism. Stop. Anyone who doesn't think it was fought over slavery is either misinformed or deluding themselves for psychological reasons. Full stop. Now if you want to see me debunk the states' rights argument, just ask.]

I've written all this as an introduction to my experience of reading Toni Morrison's Beloved (1987). In that book, it's all there - the passing down by oral tradition, houses that move, spirits that come back to walk the earth, and most terribly, the personal cost of slavery: its loss of freedom and dignity.

Beloved, in a basic way, is about a slave woman named Sethe, sexually assaulted and beaten by her owners, who escapes her plantation in Kentucky and crosses over the Ohio River to Ohio where she is reunited with her three oldest children ( who had already escaped with others). When her master comes to retrieve her (thanks to those Fugitive Slave Laws), she kills one of her children and is on her way to killing the rest before she is stopped. Convinced that she is out of her mind, her master leaves her there. Eighteen years pass, and the house she and her surviving daughter live in communicates with them, haunted by the spirit of the murdered child. When Paul D, another slave on the old plantation called (ironically) Sweet Home, enters into her life again and demands the spirit leave the house, the spirit that has been haunting it takes on corporeal form; they call this 18-year-old girl Beloved.

I got here via the Sarabite and am enjoying your stuff.

I'd like to read your debunking of the states' rights argument, that is, if you are interested in writing up those thoughts on your blog.

Welcome axegrinder, and thanks.

I don’t want to do a separate post on this, but I will include a few brief examples here that argue against “states’ rights” being a legitimate rallying cry for the South, as violations of states’ rights in the North and territories were considered acceptable and even argued for by Southerners. I wish I could offer more reference materials, but I’m a bit too busy right now to dig through my books, sorry.

A great deal of political skirmishing in the first half of the 19th century involved the expansion of slavery into the western territories: the 1820 Missouri Compromise, the wrangling over the annexation of Texas, the Compromise of 1850, the Kansas-Nebraska Act of 1854. Southerners only talked ‘states’ rights’ when it applied to them. And the state right they most wanted to be assured of was their right to slavery. Slaveholder interests won almost all the federal battles.

Almost all new territory was to be slave territory, or so the Southern claque argued. They were not in favor of popular sovereignty and allowing settlers in new territories to decide whether or not to allow slavery. No, the expansion of slavery must occur no matter the opposition of those who live there. What is the Missouri Compromise but a decision, favored by Southerners, to NOT ALLOW settlers in territories south of 36°30’ to decide for themselves whether or not to enter the U.S. as a slave state?

“We will have old Mexico and Cuba!” became one Southern rallying cry when Southerners, realizing that they probably had reached the western limits of slavery expansion, wanted to acquire yet more territory that would be slave states. This despite the fact that slavery was illegal in Mexico (the defiance of that policy by Americans who had settled in Texas was one of the reasons for the war of independence between Texas and Mexico). Cuba still had slavery and practically made some Southerners salivate at the thought of it becoming part of the U.S. Read DeBow’s Review for more.

The infamous Dred Scott v. Sanford Case (1857) was a huge decision by the federal government to PROTECT slavery by declaring that blacks were not/could not be citizens, and violated the states’ rights of Northern states that allowed former slaves to be citizens. It was nevertheless highly praised by Southerners.

And then there were the Fugitive Slave Laws. Southern lawmakers wanted to EXPAND the powers of the federal government by involving U.S. courts in the return of slaves to them, including penalties against local law enforcement officers who did not co-operate. This was done in clear violation of the states’ rights of Northern states, particularly their right to enact and follow their own personal liberty laws. Irony of all ironies, South Carolina would actually include the personal liberty laws of some Northern states as one of their grievances in their secession document. We Southerners should be allowed to claim states’ rights, but not you Northerners!

There’s also the evidence from secession documents that shows the only “state right” they were concerned with was their “right” to slavery. In truth, the South argued for the expansion of federal power (and territory) and violation of the states’ rights of Northern states as long as it was in favor of slaveholders’ interest. The “states’ rights” rallying cry is just smoke. AND they were the ones to attack the North, starting the Civil War.

AG
Me whole tribe just having fun, we gonna dance til morning come.