skip to main | skip to sidebar

Spacescaping: (according to Terry Riley) combining the sounds of plasma waves in space with a string quartet and chorus

On stage are small metal rods of varying heights; these rods have lights along their axes and at each tip that illuminate to a blue-white glow. The backdrop is a screen that fades from dark blue at the top to light blue at the bottom. A man carrying a violin walks on stage, sits down, and waves his bow over his music stand. A point of bright green light appears, and we hear a large bellowing sound, like a deep voice in a huge underground cavern, that fades away gently to a whisper. A few seconds pass, and the man repeats the sweep of his arm. This time the sound is an electronic twitter that ends abruptly. A man holding a cello walks onto the stage, settles down, and waves his hand behind him over a rod. Again, a point of green light. The sound is an unearthly mid-range chirping. Eventually, as these two men continue their arm sweeps, a violist and another violinist join them on stage, and all four men take part in these motions and each time they do sounds are heard. Eventually, the first man on stage brings bow to string, and the familiar sounds of a violin began, as the screen shifts from blue to a display of different geometric shapes. For those who don’t know, they are close-up pictures of the “how to play” instructions on the gold record sent on the Voyager space craft in 1977 that contains sounds from Earth – to those out there, this is how we sound. 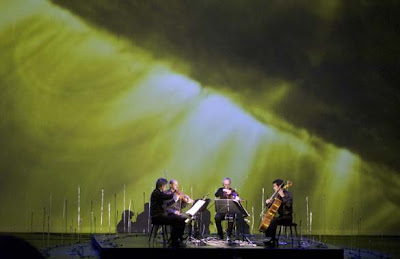 Thus begins Terry Riley’s Sun Rings, a ten-part work performed by the Kronos Quartet and the Stanford Chamber Chorale at Stanford on January 18. The work was commissioned in 2002 for the Kronos Quartet by the NASA Art Program, among others. The work is a multimedia presentation – visual design by Willie Williams, lighting design by Laurence Neff, and sound design by mark Grey – that utilizes sounds of plasma waves from outer space, string instruments, human voices, and pictures of stars, swirling orbs, mathematical equations, the solar prominences, and life here on Earth.

The sounds from space are from the collection of physicist Don Gurnett, a builder of plasma-wave receivers sent on interplanetary spacecraft. Plasma, ionized gas, can propagate waves caused by the movement of a series of electrically charged particles and the response of those particles to electromagnetic fields. The waves that a plasma can support can reveal a great deal of the characteristics of that plasma. The waves themselves are detectable with an electrical antenna and a radio receiver. Thus, we know that lightening and the Northern lights make whistling sounds, electrons trapped in magnetic fields (such as those surrounding most of the planets) make bird-like sounds called chorus, and the place near Jupiter where the solar wind (high velocity plasma) meets Jupiter’s magnetic field sounds like a sonic boom.

The work uses those sounds, looped rhythmically or played in response to a hand movement from the musicians. The musicians sometimes duplicate those sounds, at other times the sounds are the background for rapid-fire arpeggios. At all times, the sounds from the stage are accompanied by visuals on the screen behind the musicians and by the lights of the rods. At one point, as the musicians begin playing music so lush it could be a Brahms string quartet, the rods light up at their tips and the screen reflects the blackness with twinkling light from the stars - the night sky. This drifting into space dissolves as the violist plays increasingly dissonant sounds, and the screen becomes fiery red, and then fades into orange and yellow as the violins repeatedly play a 6-note lullaby.

At another point in the piece, human voices join in and duplicate the space sounds: in a choral feat, while holding long notes, they manage to sound like chirps and eerie whistles. They sing words that cannot be identified, but as the musicians stop playing and the screen goes black, they begin to flatly speak sentences – a cacophony of the various phrases that we, through radio waves, constantly send out into space.

This work reminded me of the necessity of the experience of live performances – the immediacy of it, the thrill of being part of an audience participating in the event. I don’t think I would have enjoyed this work (indeed, I’m not a big Terry Riley fan) listening to it on cd or watching a clip on youtube. Some things need to be able to pierce you or engulf you (visually and aurally). And it’s partly because of the features of live performance that I cannot recall the last time art left me so optimistic. There’s a certain sunny innocence in our explorations of the other planets and further out into deep space, in our desire to send out little feelers and try to see and hear what’s out there, and wanting whatever it is out there to know what’s back here – the desire to communicate as a basic human yearning.

The final part of the work begins with the well-known image of man and woman on the Pioneer plaque, his hand waved in a friendly gesture. The work ends with the words “One earth…one people” spoken over and over again, as various images from earth show up on the screen. And the final sound is a human voice saying, “one love.”

This record represents our hope and our determination
and our goodwill in a vast and awesome universe.

- Jimmy Carter on the Voyager record

What an interesting and informative post. The stage performance was described with such detail that one felt they were watching the opening of it.

It sounds like a unique production and worth the experience. What was really intriguing was the use of the plasma waves to conduct the sound and use of lights.

Informative, for I had never known, or even guessed, that the famous Voyager sound-recordings had utilized plasma wave captures. In the back of the head, had always wondered how an `alien starship crew' was supposed to figure out "how to play the recordng", and this explains it! Such universal facets could probably be deciphered. It does remind of the use of sound in "Close Encounters"

Finally, there was this:

This work reminded me of the necessity of the experience of live performances – the immediacy of it, the thrill of being part of an audience participating in the event. I don’t think I would have enjoyed this work (indeed, I’m not a big Terry Riley fan) listening to it on cd or watching a clip on youtube. Some things need to be able to pierce you or engulf you (visually and aurally).

Agree. Another example is a performance opera like "Phantom of the Opera" -- seeing the Broadway production was a totally different thing from a video.

And it’s partly because of the features of live performance that I cannot recall the last time art left me so optimistic. There’s a certain sunny innocence in our explorations of the other planets and further out into deep space,

So true, and especially so in today's age where News is non-stop "talking down" of possibilities. Stimulating post!

AG
Me whole tribe just having fun, we gonna dance til morning come.